David Glassberg, “Sense of History: The Place of the Past in American Life” (2001)

The range of this sensibility is communicated through several case studies, from First World War memorials in Orange, Massachusetts to the thirteen-hour Civil War photomontage marathon organized by Ken Burns and financed by a variety of public and corporate sponsors. In his introduction, Glassberg references Wallace Stegner and Eric Hobsbawm. A Stegner quote fortifies Glassberg’s argument, as “No place is a place until the things that have happened in it are remembered in history, ballads, yarns, legends, or monuments.” (Glassberg, 2001: 19) In the case of the recently deceased Hobsbawm, Glassberg references his 1983 co-authored work, The Invention of Tradition. In short, this work explores how one generation after another envisioned themselves as having a kind of timeless connection with the customs of the past. Glassberg also aptly references William Faulkner, Toni Morison, and Louise Erdrich, individuals who through fiction and prose develop an identity by remembering land- and city-scapes from earlier years.

This developed identity means that when we think of, say, Erdrich, we immediately associate her with her descriptions of the Red River, or of Wahpeton, North Dakota, or with her sisters, or with her bookstore in Minneapolis, Minnesota. It is similar with Stegner, as he is inextricably bound to East End, Saskatchewan, and the same goes for Walter Webb, N. Scott Momaday, Ernest Staples Osgood, Paul Sharp, Gilbert Fite, Willa Cather, and Glenda Riley, all of whom worked toward creating a sense of Great Plains history and culture. 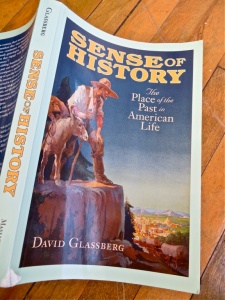 David Glassberg, “Sense of History: The Place of the Past in American Life” (University of Massachusetts Press, 2001).

Individuals throughout time can associate with, reject, or fix their own particular stories to perceptions that authors and historians have had about certain landscapes. When a culture becomes familiar with a common set of stories, that culture is able to fixate on and relate to one another. And when an economic developer sans a sense of history takes the reigns and proposes a new project, Historic Preservationists are, at best, there to kindly remind the developer that to alter the land- and city-scape is to rub out a livable past. In Glassberg’s words:

We live in landscapes dense with both histories and memories, idealized images of the past that compete to become the standards we use to evaluate and shape our present environment. Personal recollections of past places stand against a flood of place images created for us, from guidebooks and maps published by local civic organizations that recognize some “historical” places in our community but not others, to the generic images of past American landscapes and smalltown life… History in all its varieties guides our sense of where we live, contributing to our perception of the traditions that make our place distinctive. (Glassberg, 2001: 126)

To think of Glassberg’s work in a world historical context requires that we think of each location in space and time as having its own sense of history. This indeed complicates our understanding of the past, but this complexity is nothing new. Historians, for example, that boasted the virtues and lessons of Western Civilization had one understanding of, say, Herodotus and his world, and this was much different than the understanding that Herodotus had of himself and his surroundings. This is also similar of a historian from China writing about the Mongolian hordes, or the Mongolians themselves writing about a conquest of the EurAsian steppe, from Beijing to Baghdad and to the edges of Poland and eastern Europe. In large part historians, or Public Historians, absorb methodologies set down by R.G. Collingwood in the 1930s and 1940s, at least before he collapsed and died from a brain aneurism (arguably due to his synapse firing on protracted overdrive for the duration of his life). Collingwood called on historians to first develop a philosophy toward history. That philosophy was defined as a professional ability to understand the way in which people understand or understood their world.

Wallace Stegner, “Wolf Willow: A History, A Story, and A Memory of the Last Plains Frontier” (1955)

There is a duality that comes to mind when reading Wallace Stegner, Wolf Willow (1955), and it centers on the push and the pull between the country and the city. To Stegner, the villages of Eastend and Whitemud in southwest Saskatchewan represent both an idyllic countryside as well as rural idiocy. This stands in contrast to how a city is perceived, as it embodies a sense of the cosmopolitan on the one hand, and political and business corruption on the other. When the country and the city are played off of one another, one has a choice between the rural idiocy of the countryside, or the cosmopolitan corruption of a city.

In the case of Wolf Willow, Stegner focuses on remembering Whitemud as a former attempt of Western Civilization colonizing the Great Plains with a cosmopolitan ethos. A generation later, though, Stegner says these settlements devolved into rural idiocy. He is pointed and upfront about it in the first paragraphs of his final chapter, saying how Whitemud,

…is an object lesson in the naïveté of the American hope of a new society. It emphasizes the predictability and the repetitiousness of the frontier curve from hope to habit, from optimism to country rut, from American Dream to Revolt against the Village… That curve is possible anywhere in America, but nearly inevitable on the Plains, because on the Plains the iron inflexibilities of low rainfall, short growing season, monotonous landscape, and wide extreme of temperatures limit the number of people who can settle and the prosperity and contentment of the ones who manage to stick. (Stegner, 1955: 287)

This statement stands in contrast to his remarks in the opening of the book, where he remembers his boyhood as a “childhood of freedom,” this adolescence unadulterated with impressions of Western Civilization, history, and professional training. (Stegner, 1955: 25 & 27)

From beginning to end, Wolf Willow is an evolutionary remembrance of Stegner’s intellectual development, and how he chose to remember this upbringing. As an adult who returned to visit Whitemud and Eastend, he was at once in a place of countryside idiocy, a landscape he described as a “backwater peasantry incapable of the feeblest cultural aspiration.” (Stegner, 1955: 288) This smacks of his adult inability to understand his childhood, a rejection of his past for a possible alternative that never was nor could have been. For Stegner to learn about and ridicule Western Civilization on the Great Plains smacks more of his own familial past: this should easily be considered as a way in which Stegner mocked himself. This is why Wolf Willow should be understood as Stegner’s essay on his own personal identity, a tension between his professional city life and the frontier childhood he remembered in southwest Saskatchewan. Memoirs and narratives are set down so individuals can establish a linear way of looking at the path they have already made. In this way Stegner’s Wolf Willow is, as he describes it in the sub-title, a memoir and even a confession. As right and as wrong as Stegner is within this work, it remains an individual and personal contribution to that long Great Plains historical record.