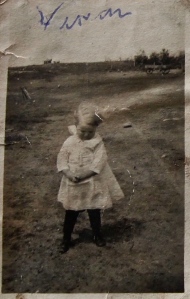 Vivian in the late-1910s on the Swedish-American farmstead just northeast of Bremen, Wells County, North Dakota. That is Vivian’s handwriting at the top of the photo too.

It’s Mother’s Day (of course, every day is mother’s day). It is a holiday with origins in the post-Civil War (American) generation, championed by Anna Jarvis just after the turn of the 19th century. The idea was to get together all the moms who had sons die in the Civil War. Today we use it to recognized the heroine feats of motherhood.

Molly and I drove over to Bismarck, North Dakota, to spend Mother’s Day weekend with Julie and Paul (my parents). I also got flowers for Molly’s late mother a couple days ago, because mothers are all around us. Always. Last night, before bed, Molly and I (or Molly and Me, which has a nice ring to it) stumbled into a family archive in Julie and Paul’s basement. Numerous photos from my late grandmother, Vivian Marie (Larson) Barth, who passed away a year ago this month.

There are a lot of photos within the archive, and a personal project goal will be to digitize them, get family members digital copies, and then consider conversations with archivists at the State Historical Society of North Dakota or NDSU’s North Dakota Institute for Regional Studies or UND’s Special Collections for eventual curation. This is why we have state historical societies and regional archives: it captures what us global locals have been on about from one generation to the next. And it is better to digitize and then curate them with a sound archives than to keep them in a box in your basement (which can flood, or something like that).

But back to Grandma Barth, and a couple photos I digitized for uploading purpose here. To celebrate Mother’s Day. The photo at top is of Vivian, taken likely in 1918 or 1919, just northeast of Bremen, northeastern Wells County, North Dakota. The second photo is of Vivian in the mid- to late-1930s, likely when she moved off the farm to Bismarck, North Dakota. And the third photo was taken likely during or around the time Vivian was attending one of those late-1930s college programs to train as a secretary. She later held positions at the Bank and state capitol of North Dakota. She did this while tending to her three boys and husband (a total of four boys). She was loving (and still is), hard-working (I remember she gardened up until she was 91), and she babysat us grandkids countless times. 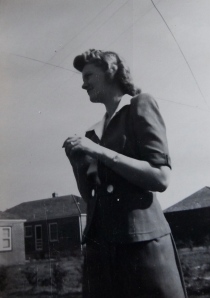 When I was real little, I remember being bummed out when my parents left for a couple weeks of vacation (I am blessed with great parents, so I tended to get bummed out in their absence). To set me at ease, before bed that night my grandma recounted a story of how her dad at the age of 13 boarded a boat in Sweden with his uncle, and set out for Ellis Island and America. She reminded me, “He was only 13.” Grandma had a way with bringing gravity and reason to any situation that was or seemed stressed. She also made extra ordinary chocolate chip cookies, Swedish meatballs, and, well, you name it. Here’s to you, Vivian. And Grandma Christy (for another blog, perhaps next Mother’s Day). And here’s to the memory of all mothers, and to making memories with our mothers today. 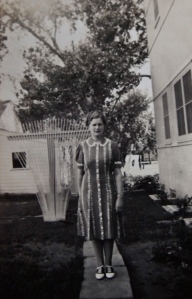 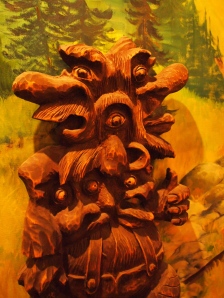 One of the many wood troll carvings at the Sons of Norway in Fargo, North Dakota.

Since it has been reported by The Daily Mail that the Viking apocalypse — Ragnarok for those of us in the know — will happen this Saturday, February 22, I figured it doesn’t matter that the History Channel’s Vikings Season II premiers on February 27. I also figured that it would be appropriate to post three photos I took on Thorsdag evening at the Sons of Norway in downtown Fargo, North Dakota (pie day is every Thursday at lunch, too). Within the Sons of Norway is the Troll Bar which, in turn, is decorated with several wood Norsk troll carvings that run the perimeter of the tavern.

Trolls have increasingly interested me as of late. In genealogical e-mail conversations with Valerie Larson-Wolfe, a distant Swedish-American cousin of mine (who lives in Chico, California), she mentioned that our great-great-Swedish uncle August used to remark on how, as a young boy, he used to see trolls in and around his family’s farm near Ïvo in southern Sweden. 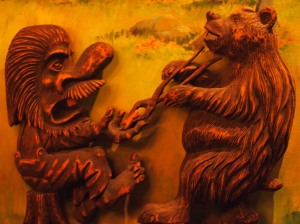 As a historian, I am interested in this not necessarily to prove or disprove the existence of trolls. Rather, I’m interested in it in from the standpoint of a social historian or folklorist: if people say they are seeing trolls, they are doing this for social reasons that might not be clear to outsiders. I’m interested in unpacking those reasons. If you’re in Iceland, though, you get the privilege of having your Supreme Court decide on whether or not to protect known elf sites (links on that here, here and here). 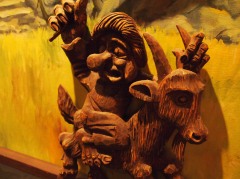 This, in turn, has gotten me thinking a bit more about sightings of small people in world history. On the northern Great Plains, it isn’t uncommon to hear stories from Mandan-Hidatsa or the Oceti Sakowin oyate of small people sightings. These sightings are amazingly important to particular cultures — much in the same way that the notions of a man walking on water or rising from the dead three days after the Roman Empire executed him are amazingly important to particular cultures too (yes, I just went there). Happy ragnarok weekend everyone. See you all on the other side (or on Monday).

Let the Scholars at Your Family and Local History: Swedish Family Photos and Academic Scholarship 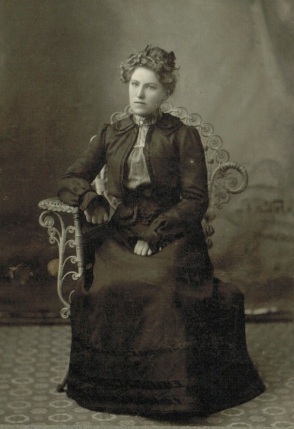 Approximately 20 years or more ago, I recall going to a Larson-Mattson family reunion somewhere in Minnesota. It was important to the Mattson side of the family because my dad’s, mother’s, mother (in Swedish, “min far-mor-mor“), Albertina (Mattson) Larson, was indeed a Mattson. I remember at that family reunion being asked who in the room had relations with the Swedish-Minnesota Civil War Col. Hans Mattson, and I was nudged by my late Grandma (Larson-Mattson) Barth to raise my hand.

Now fast-forward to a year or two ago, when I read H. Arnold Barton, A Folk Divided: Homeland Swedes and Swedish Americans, 1840-1940 (Southern Illinois University Press, 1994). Barton notes in his preface that ethnic groups engage in a kind of ethnogenesis. This means the groups develop a collective identity by gathering together and agreeing upon what they do not stand for, and what they do stand for (often times, we define ourselves by what we are not). While reading Barton’s book, though, I didn’t expect to come across Hans Mattson in the beginning of chapter 5. This was the individual I was told about over two decades at the family reunion in Minnesota. Perhaps Barton was in the crowd too. Who knows.

In his piece of academic scholarship, though, Barton said Hans Mattson hailed from the southern province of Skåne in Sverige, and he came to the U.S. in 1851 as one of the first northern European Swedish settlers to Minnesota. He served with distinction in the Civil War, and eventually became Minnesota’s Secretary of State. He returned to Sweden in 1868-69 to recruit more settlers and develop a chain-migration from Sweden to Minnesota. It worked. He acted as the Northern Pacific Railroad’s chief emigrant agent from 1871-1876, and the list goes on as to his accomplishments by and for his ethnicity.

With all that said, here are a couple photos of Albertina (Mattson) Larson, my great grandmother. I never had a chance to meet her in person, as she passed away before I was born. As a girl, she grew up in Willmar, Minnesota. Eventually my great grandfather, Hans T. Larson, got up the nerve to ask her to marry him, and they took up a homestead in northeastern Wells County, North Dakota (just north of the borderline historic archaeological town of Bremen, ND).

I’m sharing photos of Albertina for a couple reasons. The first is to make them accessible to other family members (it’s the worst when people hoard documents and artifacts while simultaneously doing nothing with them). There are unknown benefits, too, as perhaps this blog post will reach other Mattson family members who are interested in the various branches of the family. I do plan on ultimately curating the originals with the State Historical Society of North Dakota (but I’ll wait until the grand expansion is complete). By curating them with the SHSND (or any top-tier public archive), the artifacts will be stored in a safe spot with all sorts of fire-prevention and non-acidic devices (stuff along those lines). They will also be accessible to other family members, at least during SHSND archival hours. And if Swedish-American scholars want to have a look, to analyze and scrutinize them, they will be there. Perhaps they will even incorporate them into some piece of future scholarship. Who knows. Access is key, though.

During the first week of July 2012, I sat down with my grandmother, Vivian Marie (“Larson”) Barth, and we started chatting about genealogy. We, as in the Royal Humanity We, are interested in genealogy for several 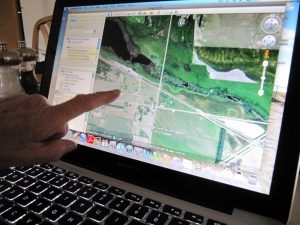 Vivian points to a Google Earth map focused in on the near historic archaeological townsite of Bremen, North Dakota. Her father, H.T. Larson, and his brothers and relations settled in and around Bremen and throughout Valhalla Township.

reasons. One of the reasons has to do with identity, or explaining who we can identify with, and how we identify who we are when asked by others. Large genealogical thinkers are often reflected in the form of theologians and naturalists (such as Charles Darwin): they have thought long and hard about where humanity came from, or might have come from.

Another reason we are obsessed with genealogy has to do with trying to explain to ourselves and others with better detail where we came from (when we know our origins, it gives us a feeling — delusional or not — that we know exactly where we are going, a way in which to push into the future).  It’s a fallacy to think that those in the past had such clarity of vision and that they new exactly where they were going. It is only the present, or present mindedness, that imposes this view on the past.

Anyhow, while chatting with this 96 year old Swede, I was able to capture some more focused familial history that invariably reflected a broader historical pattern (migration patterns and that thing we call diaspora). Vivian’s father (or my Swedish great grandfather, Hans Theodore Larson, or “H.T.” as he 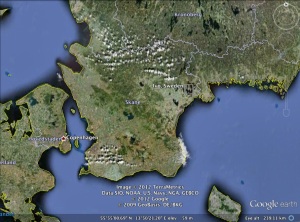 preferred to be called), came to the United States with his Uncle Pehr in 1889. H.T was 13 years old at the time, and he eventually found himself in Willmar, Minnesota (amongst other folks who talked his talk as well). I knew H.T. came from Skåne, but I did not know he came from the eastern portion of Skåne called Ivö. While sitting with Vivian, I pulled Google Earth up on the laptop and typed in “Ivö, Sweden” and hit “return.” The Google Earth map went from the now nearly historic archaeological townsite of Bremen, North Dakota (in northeastern Wells County), zoomed out, and then back in to the rural Ivö setting in southern Sweden. Below is a short clip of Vivian recalling where her father came from. One more ancillary note: does anyone else see a likeness in facial features between my grandma and the sitting Swedish King? Yeah, you’re right, I’m probably just projecting.