Live Blogging from the NZHA

I’m currently sitting in on Patrick Coleman’s talk entitled “Transnational Orangeism” at the New Zealand Historical Association’s biennial conference in the very antipodes at the University of Otago, Dunedin, south island New Zealand. The Orange Order was a militant organization that rose out of anti-Catholic sentiments in Ireland in the late-18th century. The order reached back into history to grab hold of the memory of William of Orange’s victory over King James. The former was protestant, the latter Catholic. It was a battle that was couched in religious terms, not only about politics and power, but the overlap of religion, politics and power. 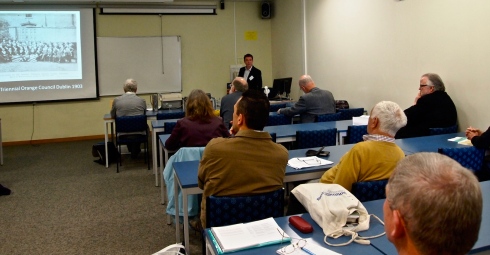 The Orange order was global, and they established lodges throughout the world (Canada, the United States, New Zealand, Australia, etc). Patrick used the historical figure of Edith O’Gorman (1842-1919), using historical biography to explain how the ideas of this particular movement moved across the world. Edith was famous amongst her 19th century Orangeists because she escaped nun-hood, converted to protestantism, and went on to give public talks about her self-described struggle.

The use and consideration of using historical biography to discuss world historical events has been a theme of several historical talks at this conference. Maya Jasanoff chatted yesterday about her work which considers Joseph Conrad and his novels as windows into the marginal territories of the global British Empire at the turn of the 19th century. So without going too much further into all of this, I’ll press “Publish” on the blog post and put my computer away to redirect my focus on this next talk.