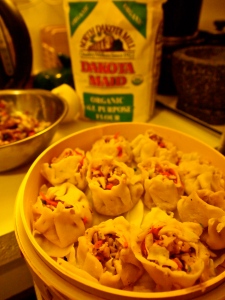 Although this blog leans toward history updates, I like to give food entry updates every now and then. Yesterday I determined to make east Asian steamed dumplings. The main factor of dumpling preparation is making the dough. This requires about 1 part boiling water to 3 parts flour, as the boiling water brings out the elasticity in the dough. I used North Dakota State Mill organic flour. After adding the boiling water, I mixed it with a wood spoon until the dough was cool enough to mix by hand.

The recipe in front of me also called for ground pork, but instead of that I used local goat shank that I had in the freezer. The goat meat came from County Line Meats, this just south of Jamestown. Since the recipe called for 2 minced garlic cloves, I added 5. Also into my dumpling mix went minced chives, onion, carrot, ginger, and a dash of rice wine vinegar, cane sugar, ground pepper, mint and soy sauce.

All this filling gets centered in the middle of the thin dough sheets I rolled out. Then a systematic pinching of the dough around the perimeter forms up these dumplings, almost into the shape of little pies. I dropped these into the bamboo steamer, but after laying down a layer of cabbage. I didn’t have Napa cabbage handy, so I used standard issue Euro-American cabbage. The dumplings were great, and since the goat, flour and cabbage were local, I decided they were Northern Great Plains-Chinese fusion dumplings.

The next dumplings I make are going to be an appropriated recipe we recently had in New Zealand. They were wontons filled with minced lamb, onion and mint. They came with a mint dipping sauce too. They were spectacular. It’ll be easy enough to re-create goat-mint shu mai. Everyone should do this. It’s not difficult.