Washington, DC and Dakota Territory: Then and Now 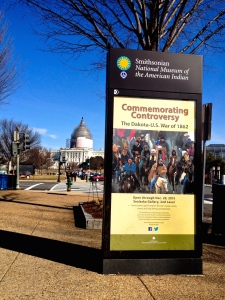 A Washington, D.C.-Minnesota and Dakota Territory historical note: the US Capitol cast iron dome approached final construction at the same time that the US-Dakota Wars unfolded in Minnesota and Dakota Territory from 1862-1864. On December 2, 1865, the “Statue of Freedom” was placed on top of the US Capitol dome. To bring this into the present, The Smithsonian’s National Museum of the American Indian (SNMAI) has a Dakota-US War of 1862 exhibit up through December 29, 2015. This is a bulletin that speaks to that outside of the SNMAI’s entrance. The US Capitol’s cast iron dome in the distance is undergoing a much needed preservation/rehabilitation update. Here in the Dakotas, we are undergoing a much needed reappraisal of the US-Dakota Wars.

The Bismarck Tribune’s graphic of the proposed route through what essentially is the Gettysburg of the Northern Great Plains, the Killdeer Mountain Battlefield from 1864. Historical actors involved included Sitting Bull, Inkpaduta, Gall, Sully, among others.

This morning a story broke in The Bismarck Tribune on a proposed transmission line route directly through the core area of the Killdeer Mountain Battlefield. North Dakota State University’s Center for Heritage Renewal, led by Professor Tom Isern, responded with the following media release:

The Center for Heritage Renewal at North Dakota State University is preparing a submission for the North Dakota Public Service Commission hearing in Killdeer on Sept. 4. The subject is an electrical power transmission line and substation proposed to be built, by Basin Electric, in the core area of the Killdeer Mountain Battlefield. The topic has been covered by North Dakota media, starting yesterday.

The Center for Heritage Renewal was established to identify, preserve and capitalize on the heritage resources of North Dakota and the northern plains. One of the center’s objectives is to assist state agencies, private organizations and the people of the state and region in generating prosperity and quality of life from heritage resources. Another objective is to provide expertise and action in the fields of historic preservation and heritage tourism.

The center recognizes the efforts of Basin Electric to support regional development but is concerned that the environmental impact statement for the project takes no cognizance of the historical significance of Killdeer Mountain.

Killdeer Mountain was the chosen ground on which Dakota and Lakota fighters, including Inkpaduta and Sitting Bull, confronted the Northwest Expedition, commanded by General Alfred Sully, on July 28, 1864. This was the largest military engagement ever to take place on the Great Plains of North America, and a crucial episode in the Dakota War of 1862-1864.

University Distinguished Professor Tom Isern, founding director of the center, observes, “Killdeer Mountain is the Gettysburg of the Plains. It is, arguably, the most significant historic site in all of North Dakota.”

Killdeer Mountains 150 Years Later: Rescuing the Fallen and Forgotten Veterans from the Past

Tomorrow, Thursday, February 7, 2013, at 1400 hours (CST), North Dakota Senator Connie Triplett (District 18, Grand Forks) will collaboratively sponsor SB 2341, a bill that seeks to carry out an archaeological and historic-archaeological study on the Killdeer Mountains in Dunn County, western North Dakota. I’ll be attending this hearing (it will take place before the Senate Government & Veteran’s Affairs Committee in the Missouri River Room), and Triplett has circulated an e-mail asking historians, landowners, archaeologists, Natives and others for testimonies to support this bill. The Killdeer Mountains figure into our nation’s history and the US-Dakota Wars that spanned from 1862 in the Minnesota River Valley, and carried on through 1864 at Killdeer Mountains in western North Dakota. 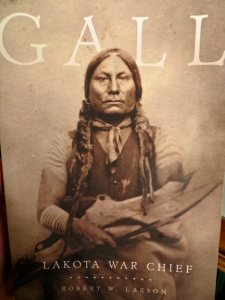 What we know right now about Killdeer from 1864 is limited (the State Historical Society of North Dakota has a nice and thoughtful write up of it here), and further archaeological and historical research is needed. It was an action between the Union Army and various Dakota nations, and some key players involved were Sitting Bull, Inkpaduta, Gall (among others), and General Alfred Sully and his Union soldiers. In many ways, just as this nation recognizes and respects fallen Union and Confederate combatants and non-combatants, this nation owes it to honor the Dakota soldiers and non-combatants killed in Dakota Territory during the Civil War. To extend this honor requires and necessitates a deliberate and culturally sensitive systematic archaeological and historical study like the one proposed in SB 2341. We understandably honor Americans that have fought and died in 21st century warfare, and we ought to also be honoring and rescuing those fallen and forgotten from the Killdeer Mountains from July 1864.

Note: according to Sioux County Veterans Service Officer Roster, today in 2013 Standing Rock has a veteran population of 357.