The Bismarck Tribune’s graphic of the proposed route through what essentially is the Gettysburg of the Northern Great Plains, the Killdeer Mountain Battlefield from 1864. Historical actors involved included Sitting Bull, Inkpaduta, Gall, Sully, among others.

This morning a story broke in The Bismarck Tribune on a proposed transmission line route directly through the core area of the Killdeer Mountain Battlefield. North Dakota State University’s Center for Heritage Renewal, led by Professor Tom Isern, responded with the following media release:

The Center for Heritage Renewal at North Dakota State University is preparing a submission for the North Dakota Public Service Commission hearing in Killdeer on Sept. 4. The subject is an electrical power transmission line and substation proposed to be built, by Basin Electric, in the core area of the Killdeer Mountain Battlefield. The topic has been covered by North Dakota media, starting yesterday.

The Center for Heritage Renewal was established to identify, preserve and capitalize on the heritage resources of North Dakota and the northern plains. One of the center’s objectives is to assist state agencies, private organizations and the people of the state and region in generating prosperity and quality of life from heritage resources. Another objective is to provide expertise and action in the fields of historic preservation and heritage tourism.

The center recognizes the efforts of Basin Electric to support regional development but is concerned that the environmental impact statement for the project takes no cognizance of the historical significance of Killdeer Mountain.

Killdeer Mountain was the chosen ground on which Dakota and Lakota fighters, including Inkpaduta and Sitting Bull, confronted the Northwest Expedition, commanded by General Alfred Sully, on July 28, 1864. This was the largest military engagement ever to take place on the Great Plains of North America, and a crucial episode in the Dakota War of 1862-1864.

University Distinguished Professor Tom Isern, founding director of the center, observes, “Killdeer Mountain is the Gettysburg of the Plains. It is, arguably, the most significant historic site in all of North Dakota.”

More On the Civil War and Plains Indigenes Then and Now

Yesterday evening, while sitting around a campfire in northeastern North Dakota, I looked into A People’s History of the Civil War: Struggles for the Meaning of Freedom (The New Press, 2005) by David Williams, and this morning I am finally getting to Thomas Yellowtail, Native Spirit: The Sun Dance Way (World Wisdom, 2007). I’m primarily interested in different interpretations of Dakota, Lakota, and Nakota culture, specifically how this might bear on the historical record (which is why I’ve been blogging on it here, here, here, and broadly on the topic of war here).

In Chapter 7 of A People’s History of the Civil War, Williams says that due to the advanced positioning of the North and South, “Federal forces used the war as an excuse to quicken the pace of killing Native Americans and driving the survivors from their homelands.” (Williams, 2005: 390) This is true, and Williams is upfront about it. An internal American war gripped the eastern 1/3 of the nation (a nation that was both trying to stay together, and expand by overtaking indigenous lands), and certainly the South and North looked at the various territories and newly fabricated states to the west as part and parcel to the overall wartime efforts. Meanwhile, and at the same time, Britain watched America from Canada, and France and Mexico were having it out south of the Rio — think Cinco de Mayo, or the Battle of Puebla, where the Mexican army routed French imperial forces. If Native America could be removed or restricted to reservations, the newly acquired lands could be put into intense farming production. Williams’s work follows the intellectual stream of Howard Zinn, who championed the monograph and who also sparked the intellectual drive. If contrasting the standard Civil War historiography with Native scholarship, though, one starts to understand in much greater detail what else was at stake. 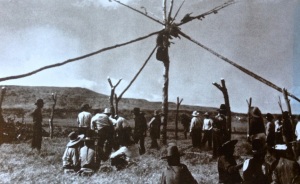 The introduction of Thomas Yellowtail’s work was written by Joe Medicine Crow, then (in 2007, when the book was published) a 92-year-old Crow tribal historian. Medicine Crow says his grandparents “were pre-reservation Indians who lived before the reservation was set up. They would go camping, hunting, and the men went on the war path.” (Yellowtail, 2007: xi) In reading this, it is important to understand that these activities — camping, hunting, and the war path — mean something much different than they do to us today. They were the very substructure of Plains indigene culture, and to camp and hunt and go on the war path meant one was able to support what we would today call a household (Jonathan Lear goes on in great detail and at length in his excellent work that everyone should read, Radical Hope). Being told by an outsider (or a colonizer) that you need to change the way you do things and that everything you did up to this point is now meaningless are also things that continuously need to be understood. It’d be likened to spending the time and energy to train as a professional welder, and then being told by an outsider that your efforts were for nought. And now here is a new way we’re going to do things. So put away that senseless welding torch and abandon the culture your fore-fathers and -mothers spent generations cultivating. In 1884, this is what the United States ordered, as Medicine Crow says: “The ‘Secretary’s Order’ of 1884… prohibited the Indians from practicing all activities related to their culture, including singing, dancing, and all traditional ceremonials.”

I’m afraid I’m getting a little preachy here, but the idea behind this has universal implications. If one ethnic group is able to do this to another ethnic group, then this means it can happen at any time to any one of us. In looking at that, is that a problem that could continue echoing through time? Yes. Certainly this — 19th-century Manifest Destiny — is something we can understand as happening at a particular time and place, and we can try to distance ourselves from it and say, “Well, we need to understand the historical actors on their own terms.” Yes, this is true (I’m as big of a fan as R.G. Collingwood as the next) But we still need to understand that the terms from yesteryear reverberate throughout the reservation and non-reservation world today (on July 11, 2013, Byron Dorgan had a excellent piece on these implications in the New York Times).

Some Rough Notes on War

I’ve been coming into the topic and conversation of war in the last week. Twice at least. On Sunday I chatted with a Kurdish friend and got some thoughts on his perspective of the Second Gulf War. Being Kurdish, it was understandable to hear him say that yes, he is glad the United States went at the Ba’ath regime, Saddam Hussein and his two sons (I reminded myself out loud that Saddam was, to put it mildly, a super-jerk and no friend of the Kurds). As John Stuart Mill reminds us, though (and this is paraphrased), when the bullets start flying in a war, all chaos breaks loose and there is barely a modicum of reason, restraint and control. Innocent people die. And it is terrible and it needs to be acknowledged. I have found that it is best to chat with individuals about their individual experiences in war when it comes down to it: ears open and mouth closed. Wars are complex and terrible things. This last Sunday, my Kurdish friend had some remarks on it all but he had to take off. He said we’ll sit down and have a dinner and a conversation about it all some time. I agreed.

The second encounter was yesterday evening when I had a chance to watch Ari Folman’s 2008 film, Waltz with Bashir, this a work of remembrance of the First Lebanon War (1982). The film eventually takes the viewer to the horrors of the Sabra and Shatila massacre. If you haven’t seen this movie already, you should. Note: it is an adult topic — war, and the horrors intrinsic to it and remembrance thereof.

Within the film, a female psychiatrist (at least I think she was a psychiatrist) was having a conversation with a friend or patient, and she was remarking on how a soldier dealt with war by treating it, in his mind, as one would treat a vacation. She referred to this as the soldier’s “camera,” and psychologically the soldier was able to deal with processing the immediate carnage this way (think Christopher Browning’s 1998 monograph, Ordinary Men: Reserve Police Battalion and the Final Solution in Poland).

When the soldier came across a Hippodrome of slaughtered and mangled Arabian horses (ravages from the war), the soldier’s psychological camera, she said, broke. This mental shift caused the soldier to look at everything as it was, the change in perspective pulling him into the reality of what was going on. I thought about this and Ari’s use of cartoon to tell this story of remembering The First Lebanon War: impressionistically, a viewer of the film understands this is a serious topic of war. But Ari’s use of cartoon gives the viewer distance. And then toward the end of the film, gravity returns as Ari uses actual footage from the Sabra and Shatila massacre, this carried out by Lebanese Christian Phalangist militia in Beirut. Once again, see this film. It is important. 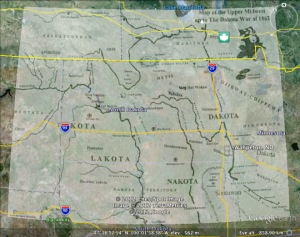 Last night in Ellendale, North Dakota (not far from a September 1863 massacre site of memory and mourning that is Whitestone Hill), a panel discussion between Natives and non-Natives took place at the Ellendale Opera House. The discussion opened with introductory remarks by North Dakota State University’s Tom Isern, and then by philosopher of ethics, Professor Dennis Cooley (Dennis is co-founder of the Northern Plains Ethics Institute, linked to here). From there Richard Rothaus provided an overview of the US-Dakota Wars that started in the Minnesota River Valley, 1862, but did not end in Mankato with the largest execution in United States history. In the following years, the US engaged in a protracted punitive campaign against all Sioux, regardless of whether they participated in the US-Dakota Wars throughout the Minnesota River Valley in 1862 — the many were punished for the actions of a few.

I think one of the main reasons folks came to this — and they expressed it — was to listen to what Tamara St. John (Sisseton-Wahpeton Oyate, South Dakota) and Ladonna Brave Bull Allard (Standing Rock Tourism Director, North Dakota) had to say. Toward the end of the conversation, several of the Ellendale residents expressed immense thanks for the opportunity to listen, and one individual said they will use this panel discussion to navigate how to go about organizing the 150th year event at Whitestone Hill this September.

The US-Dakota War Panel Discussion from April 5, 2013, at the Opera House in Ellendale, North Dakota.

To solidify our imagined sense of geographic history, I thought that it might be helpful to circulate the following map above that situates Native America on the northern Great Plains circa 1862, and contrasts it with the 2013 Eisenhower Interstate system. Also, linked here is a audio recording of the panel discussion in Ellendale, North Dakota, from April 5, 2013, taken by Kenneth Smith. The entire event was sponsored by the North Dakota Humanities Council and the Center for Heritage Renewal.