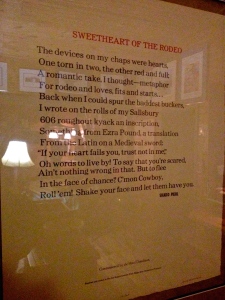 Western Americana persists and thrives on the northern Great Plains. A photo of a poem from cowboy poet Shadd Piehl, this commissioned by the Hotel Donaldson, Fargo. Shadd is a good friend.

The Bohemian pulse runs thick in the Piehl DNA (see here for detail). Some days I know we’re living out a long extension of a Willa Cather My Ántonia novel here in the 21st century. We’re sitting in the saddle of the 49th parallel on the northern Great Plains, North America. 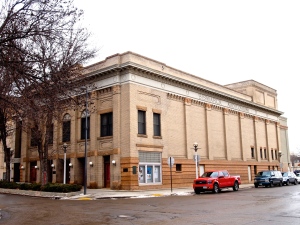 A 2014 photo of the southwest elevation of the Bismarck Auditorium (Belle Mehus).

Yesterday I took a jaunt around downtown Bismarck to capture some images of historic buildings. Autumn has turned to winter, and this means the glorious deciduous leaves are no longer. At least until spring. This also means that it is a great time to take photos of historic buildings (or buildings in general): just like the presence of leaves gives some good angles for photography, so does the absence of leaves. I ended up sauntering around the beautiful Bismarck Auditorium, renamed the Belle Mehus some years ago during a much-needed and -deserved rehabilitation and restoration. An excellent history of the Belle is linked to here on the Bismarck-Mandan Symphony’s Orchestra’s website.

Erected in 1913 and opened in 1914, this auditorium was typical for its time, at least in the sense that opera houses provided the entertainment before the rise of television, radio, movies and iPhones. Traveling opera companies would make the rounds on railroad, stopping in one town after another (much like touring bands today). When visiting historic opera houses, take note of how close they are to the historic railroad: one can imagine an opera company arriving by rail with all the graceful bustle of offloading at the train depot, making their way to a hotel and preparing for one or three days wort

It is fantastic to see opera houses restored, or repurposed. It is literally hard to come by this type of stone and brick monumental architecture, at least today. So that’s what I did yesterday: enjoyed the rehabbed and preserved aesthetics of the Belle Mehus, the Bismarck Auditorium in historic downtown Bismarck, North Dakota. I snapped a photo of the copper Victorian medallion centered at the top of the Belle, too. Michael Gilbertson even drove by, managing to roll down his window in time to give me a drive by “Hi Aaron!”

The large copper, shield medallion with Victorian ornamentation centered on the west elevation at the top of the Bismarck Auditorium. In winter, it is possible to get this photo due to the absence of the leaves.

When the Eagle Statue Landed in Bismarck 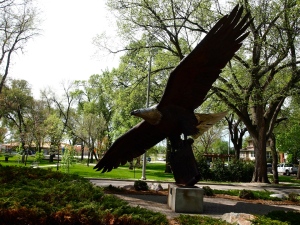 The eagle statue in Custer Park, Bismarck, North Dakota. View to the south.

I dropped into Bismarck yesterday, and after having breakfast with my folks this morning I decided to visit downtown Custer Park. It is beautiful outside.

The park itself is a kind of border between the historic western edge of downtown Bismarck and one of the historic residential areas. To the south is Elks Aquatic Center, and just to the east is a Dairy Queen. You can see how this is triangulated and primed to be a serious summer hangout for those on summer vacation.

While at Custer Park, I also visited the huge metal eagle sculpture. This eagle was dedicated in 1988 (or thereabouts), and I have a vague recollection of my cub scout troop being at the dedication. At that time, when the sculpture was new and sans rust, we were told how the eagle would take on a more eagle-like color because the metal would oxidize and rust over time. This is about all I recall, but every time I drive by the eagle, I think of that dedication.

On this Memorial Day weekend, it seemed fitting to take and post a couple pics of this winged statue, as it is swooping into the park with a handbill that reads “We the People…”

Neary’s “weld” signature from 1988 at the base of the eagle statue.

The dedication plaque below reads as follows:

This sculpture was dedicated to commemorate the bicentennial anniversary of the constitution of the united states of America on October 1, 1988.

Funding Provided by: Fraternal Order of the Eagles, Bismarck, Aerie No. 2237

Today, artists have pushed metal sculptures in different directions, now using found metal objects to craft works of industrial public art. Here is a link to some of that at the University of Montana in Missoula, and some more from Lemmon, South Dakota.

The Great Hall in the Capitol of North Dakota

This last weekend I dropped into Bismarck to catch up with my folks, to do a bit of research, and to take in a bit of the WE Rise event with Molly McLain, Karis Thompson and others at the state capitol. The luncheon for the WE Rise gathering was also held in the Great Hall at the capitol. The Great Hall is, unsurprisingly, a really great room, with tremendous verticality. At least this is the perception I had, having grown up on the Great Plains which is more horizontal than vertical. The Art Deco aesthetics (from 1925 and on) also reminded me of the 21st century Steampunk movement. Below are a couple photos of the Great Hall from March 11, 2013.

The Great Hall of the North Dakota capitol in Bismarck. Photo looking west.

The Art Deco chandeliers in the Great Hall of the capitol in North Dakota. This is an aesthetic and style that has been appropriated by the 21st century Steampunk movement. 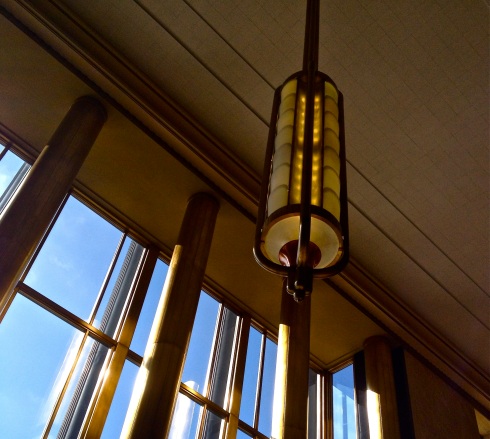 A chandelier close up in the Great Hall.

On the afternoon of October 25, 2012, I dropped in to the construction site that is Laughing Sun Brewery in downtown Bismarck, North Dakota. Laughing Sun Brewery is co-owned by two friends, Todd Sattler and Mike Frohlich (certainly pillars of northern Great Plains culture and society). When Sattler isn’t practicing law and when Frohlich isn’t practicing the digital humanities, they are thinking incessantly about how to make better beer and beer making better, and how to bring a public tavern to fruition. The first video is Todd expanding on the brewing vats from 10/25/2012. That video is here:

I continued pressing Todd for more information (the people want beer! and they want to know the processes of getting beer!) after he got down off the ladder, and he showed me some rough hewn slabs of cottonwood recently milled and donated by the Suchy family. Last year the Missouri River bottoms flooded (every where between Fort Peck, Montana and St. Louis, Missouri), and this in turn caused massive erosion and property loss, in addition to felling large cottonwood trees that typically grow in the river bottoms of the northern and central Great Plains. Todd and Mike are considering how to make this lumber work for table tops, and this will be a bit tricky. Todd expands on the cottonwood logs here:

The trick with building with cottonwood is that it is soft and fibrous. This means that when these boards

dry, they will certainly bend. Todd said he is looking for ways to deal with controlling some of the bending, and they may just end up fixing, latching and securing the large slabs down to a horizontal surface while they dry and — as the punk-DIY ethos goes — see what happens. There may be a way to slice up the rough hewn boards after they dry, and re-fix them with epoxy into shapes that are more conducive to holding level large mugs of tasty beer.