Before getting after some technical writing this morning (only to be later usurped by some Dakota language studies), I thought I’d link to some forthcoming scholarly analyses on the cultural movement of Punk in all of its unadulterated filth and fury. You can read about the soon-to-be-realeased Punk Archaeology anthology here, and about a work of Punk Sociology here. It was great this morning to come across a local story of a proto-punk Jonathan Richman, who is getting ready to play the Aquarium in downtown Fargo, North Dakota this next week too.

On this single-chord punk note, it’s appropriate to mention the passing of one of the first proto-punks, as memorials and obituaries on Lou Reed have been popping up all over the place (here, here, here and here). This shouldn’t eclipse the passing of folk punk hero Phil Chevron (aka, Philip Ryan of The Pogues or The Popes, depending on the year) in early October 2013. A sad reality for sure, and a time for reflection and contemplation.

And although we are losing our original punk heroes, punk culture continues pushing in a variety of directions today. Here is a photo from some boots-on-the-ground punk (lower case “p”), this coming from the delicious Modern Times cafe in Minneapolis, Minnesota. A couple weeks ago Molly and I had a chance to make a quick jaunt down the I-94 block from Fargo to MSP to visit a couple friends, and the next morning we hit up this cafe. It’s at the intersection of Chicago Avenue and E. 32nd St. in Minneapolis, and everyone should go here. It’s a place where punks either are parents or a place where punks bring their parents to engage in politely brash conversation and society. A couple more photos below, one of the delicious breakfast meal, and below that a photo of a post card from the fine by-and-for establishment. The only thought left was this: “When will Modern Times open up in downtown Fargo and Grand Forks?” 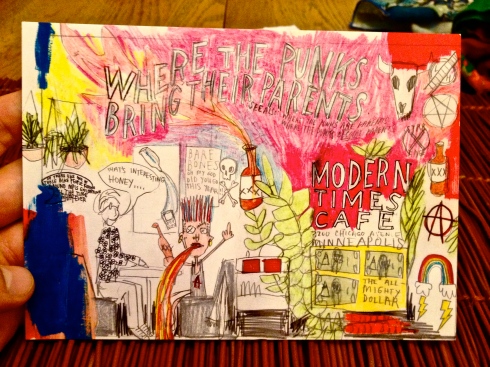 A Modern Times Cafe postcard indicating that this is a place where punks bring their parents.

At the right, the viewer is informed with the icons that Modern Times is anti-establishment. This includes an anarchist logo, a rainbow with lightning bolts, a pentagram (suggestive of neo-pagan revivalism or acceptance), a phrase that mocks “The All-Mighty Dollar” (strongly suggestive of a counter-capitalist culture), and so on. At the top is a descriptive banner that says, “Where the punks bring their parents; see also: where the punks are parents, where the punks become parents.” Seated in the lower left are two individuals, presumably a mother and her son. Impressionistically, the son is advertising to one and all that he doesn’t care (this indicative of his hoisted left-handed single digit and a “xxx” booze bottle in his right). His mother, like all loving mothers, is just happy to see that her son is engaged in activities of all sorts. She is responding to her son, saying, “That’s interesting honey…”