A couple weeks ago a friend, Tayo, texted and asked if I would be his supply line for the Maah Daah Hey 100+ this coming Saturday, August 6, 2016. His original text read, “Do you have any interest in spending a night in the badlands and being my support vehicle for the Maah Daah Hey 100 bike race the first weekend in August?” I asked about exact dates. And then checked with the calendar. And then quickly talked myself into doing this after chatting a bit about it with my wife (she was enthusiastic too).

The trail name, Maah Daah Hey, is from a local language, the Mandan people. The trail name translates into something along the lines of an area that has been or will be around for a long time. I know this because I Google’d it. But there is likely a ton more nuance to the phrase than is captured by this one, Google’d definition.

So what does one need before doing the entire supply and gear (SAG for short) for a comrade and friend? It first requires time to think about what to bring and how to prepare. The Maah Daah Hey association has built up an impressive road map and guide for both riders and the SAG support vehicles. While the rider zips through an impossible and marked course in the rugged badlands of western North Dakota, the SAG vehicles zip around on the scoria/klinker covered roads to meet their riders at the next check point. I was reading that just a bit ago and decided to blog these thoughts.

Before all this, though, Tayo and I spent the last week hypothesizing how we might locate or bum an appropriate SAG vehicle. Even a modest weekend outing in western North Dakota requires a bit of gear. And something that requires gear requires the proper vehicle to haul that gear. The last time I did something recreational like this was with Adventure Science, the 100 Miles of Wild: North Dakota Badlands Transect. In this 2013 outing, I helped the team with supply and gear. It was during the late winter or early spring. With the snow thawing, it turned the badlands silt into super slick mud during the day and afternoons. Then, at night, it would refreeze. And the process would repeat itself. It’s been doing this for a long time. Which, when thinking about it, makes the Mandan description applied to this place all the more fitting. It’s the first week of August, though, so we don’t need to concern ourselves with the thaw and slick mud. I checked the weather forecast, and it said no rain too.

I touched base with a friend who has a huge pick up truck (but small by Bakken Oilfield standards). He said go ahead and use it over the weekend. So this evening my wife and I picked it up and drove it over to Tayo’s to load most of his gear. It’s now parked. And I’m taking this blogging break from laying out my own gear. I still have to toss a couple changes of cloths into a backpack.

I want to continue narrating this and uploading it eventually to this blog. I won’t be hooked up to internet. So I’ll type out updates on Microsoft Word and later upload them. That’s the ambition. It’ll provide Tayo and I with a bit of future history and memory. Tayo will be way too focused on the ride. So again, this little log will be quite a bit of fun. 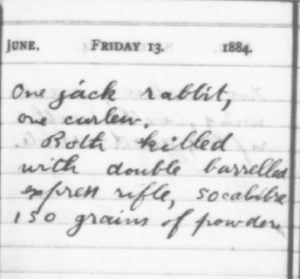 This afternoon I’m doing a bit of research and reading of Theodore Roosevelt’s 1884 diary from the digital collections of Dickinson State University’s Theodore Roosevelt Center. A very, very, very sad diary entry from February 14, 1884, the day his wife and mother died (on the same day!).

Teddy wrote an “X” on this page, and followed it with the short, heartfelt statement: “The light has gone out of my life.” Sad!

On June 9, 1884 he arrived at his Chimney Butte Ranch on the Little Missouri River in western North Dakota (then Dakota Territory). From here he proceeded to blow everything away for a while. For example, the June 13, 1884 entry reads, “One jack rabbit, one curlew. Both killed with double barreled express rifle, 50 caliber, 150 grains of powder.”

The next day, Saturday, he blew away two more cerlews. He must’ve took the day of rest on Sunday. But on Monday he was back in the saddle, blowing everything away again. He drilled “one badger; found out on [the] plains away from [his] hole, galloped up to him and killed him with revolver.” This hunting spree goes on for some time. I’m sensing a foreshadowing for future conservation efforts around the turn of the 19th century. We’ll see what happens next…