In the latter afternoon hours of this last Tuesday, May 15, 2018, I found myself at the confluence of where the Little Bighorn River empties into the Bighorn River in southeastern Montana. It was the first time I had been to this spot. And I stared at it for a while. 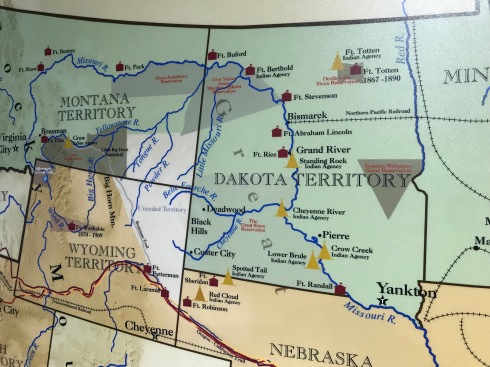 This is the location where Cpt. Grant Prince Marsh parked the steamer Far West and waited under orders of General Terry for the outcome that would go down in history as the Battle of Little Bighorn/Greasy Grass.

This is the approximate location where Captain Grant Prince Marsh secured the Far West steamer under orders of General Terry.

At the time of the action, Marsh and crew and the Far West were 15 miles from it all. Marsh’s biographer, Joseph Hanson, noted that Marsh and crew tied up the Far West at this approximate location to wait for the outcome. The waters had become too shallow to go any further. It required more than 3′ of depth.

During the wait several of the Far West crew took to fishing. And they could see little contours here and there of smoke and/or dust rise up out of the horizon.

We know what happened. And it is always a fascination to view history from the infinite perspectives it can afford us. It’s similar to or just like listening to someone else’s experience that we will never be able to experience ourselves. We sit and listen. We wonder what it was like.

When I came across this location, the one thought that cleared up in my mind was how Cpt. Marsh initially could not confirm the correct location of the Little Bighorn River in his ascent up the Bighorn River.

Water moves fairly swift, at least at this time in mid-May. Marsh operated in a pre-dam world, too. In June and late-June.

What the Redwing boots look like after making it to the confluence of the Little Bighorn and Bighorn rivers. There is no rival when it comes to eastern Montana mud. It is the best mud out there. The best.

Once boarded, Marsh set off and set a never-again-to-be-accomplished record of making it to the Missouri River shores of Bismarck, Dakota Territory, in the late-late hours of July 5, 1876.

From there the officers swiftly made their way a mile up to what is today the historic downtown of Bismarck to wake Col. Lounsberry, the owner and publisher of The Bismarck Tribune.

Lounsberry then communicated what happened by telegraph to the New York Herald, and from there the story fired around the world.

I still have Little Bighorn-Bighorn river mud on my Redwing boots from this last May 15 outing.

This entry was posted on Thursday, May 17th, 2018 at 9:53 pm and tagged with Bighorn River, Dakota Territory, Greasy Grass, Little Bighorn, Missouri River, Montana Territory, US-Dakota Wars and posted in Uncategorized. You can follow any responses to this entry through the RSS 2.0 feed.
« Hops Harvest