The History of Ancient History at NDSU

I just got off the phone with my Uncle Jim (known to others as Jim Barth), as I was curious about an old North Dakota State University (NDSU) syllabus of his.  I’m interested in the history of syllabi, primarily because it’s always fascinating to track the history of education: information that was pumped into yesteryear’s generation in contrast to what we’re pumping into tomorrow’s leaders, today.

Jim chatted briefly about this course he took back in the late-1950s at North Dakota Agricultural College (today’s NDSU). He said the course location was at the Neuman Center (he was pretty sure), in a 1-story building across the street from University Street. I figured that so others can access a syllabi from the late-1950s, and perhaps compare it with today’s courses in Ancient Mediterranean History, I’d upload photos of it. They are below. The textbook used for the course was Vincent M. Seramuzza & Paul L. MacKendrick, The Ancient World (Holt, Rinehart & Winston, Inc., 1958). A sticker on the inside cover says it cost $8.95 at Varsity Mart (inflation is also a reality of the world).

Note how informal the syllabus looks from the late-1950s, this in contrast to the corporate-university legalese we see in syllabi today. Much has changed, yes. But that’s the way with the world, and life. 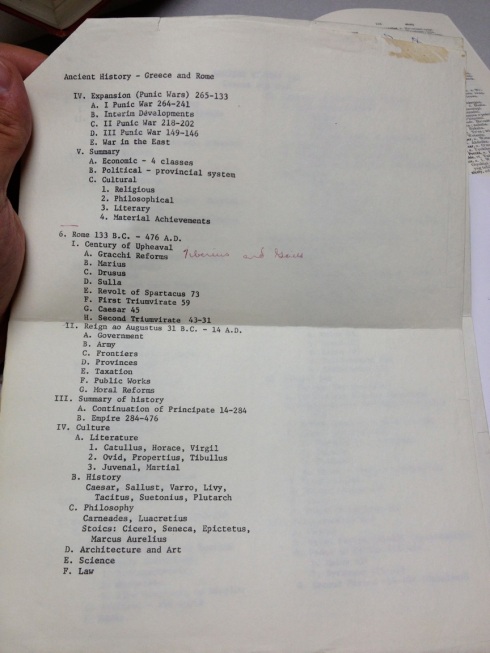 This entry was posted on Saturday, September 21st, 2013 at 3:11 pm and tagged with Mediterranean History, North Dakota State University and posted in Uncategorized. You can follow any responses to this entry through the RSS 2.0 feed.
« Philip Deloria and Dakota Goodhouse
Humanities Un-Conference: November 2-3, 2013, Fargo, North Dakota »

One response to “The History of Ancient History at NDSU”