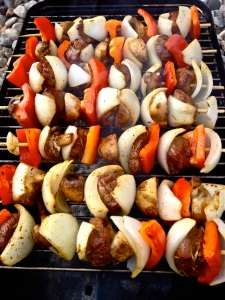 Shashlyk on the grill during the 237th American Independence Day. Note: photo does not show the eagles bursting through American flags just above this patio grill out.

I want to do whatever I can to encourage the preparation and spread of shashlyk — Central Asian or former-Soviet state kebabs, the wikipedia link here — on the northern Great Plains. Considering how the landscape is infused with German-Russian and Levantine (among others) ethnicities, and considering how North Dakota was a frontline of the Cold War, a person could easily make an argument for themselves as to why they should be preparing shashlyk for their families and friends this weekend. So here are a couple photos of what I did for America’s Independence Day, July 4th (237 years and still kicking).

Last Wednesday I grabbed a half bottle of grapefruit juice from the fridge (this leftover from the Kingsley Amis-style salty dogs I prepared the week prior), dumped this in with olive oil and raw lamb chunks. To that I added a whole bunch of herbs and spices that dominate Central Asia and the former Ottoman Empire (I’m not going to list them all, but just think cumin and curry and paprika and rosemary and even a dash or two of ground cinnamon). Skewer these with the bamboo, and also add to that red bell peppers, onion, tomatoes and mushrooms.

For grilling: use a charcoal grill if you have one handy. If all you have is a propane hibachi (which is what I had at the time), then obviously that is what you’ll have to use. During the actual grilling process, douse or spritz the shashlyk skewers with some apple cider vinegar. This will enhance the end flavor, and also get everyone’s taste buds roaring from the smell. The important thing about shashlyk preparation: first, think about this at least 2 days prior, because you’ll need the prep time. Also, the citrus and/or vinegar as central to the overnight soak for the lamb meat.

This entry was posted on Friday, July 5th, 2013 at 3:30 pm and tagged with Archaeology of Food, Food and posted in Uncategorized. You can follow any responses to this entry through the RSS 2.0 feed.
« Cultivating the Humanities
Historic Fireworks in Mandan, North Dakota »