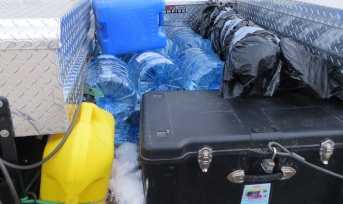 On April 4, 2013, Richard Rothaus and I chatted via e-mail about some base camp logistics for Adventure Science’s 100 miles of North Dakota wild, a pedestrian overland trek through ephemeral drainages and butte plateaus in the nation’s #2-producing oil field that is western North Dakota. We came to the conclusion that I could 1) be useful and helpful in coordinating points of drop off and extraction, and evening details for Rothaus and Andrew Reinhard; and 2) in the interim, between dropping off the team and setting up camp, I could read for comprehensive exams (also known as “comps”). On the April 21, 2013 drive out to western North Dakota, I also thought it would be a good idea to capture some traffic samples that are part and parcel to the borderline anarchy of any blossoming petroleum industry throughout the planet.

After dropping off Rothaus and Reinhard yesterday (04/22/2013) morning, I drove the field vehicle around to where they would arrive that evening, and set to reading for comps (“comps” is one part of the intellectual bootcamp, or disciplinary training, when working on a doctor of philosophy, in my case with North Dakota State University and the University of North Dakota). Winter in North Dakota is holding on a bit more than usual, and it is getting the attention of folks in both the city and in the countryside. The late winter means a late spring, and so the snow has been gradually melting.

While reading for comps, and while temporally in late spring and spatially in western North Dakota, I revisited a short passage from the first chapter of Elwyn B. Robinson’s 1966 History of North Dakota (University of Nebraska Press), entitled, “The Grassland Setting.” In this, Robinson says,

For hundreds of millions of years the Williston Basin [of western ND] and the area surrounding it were intermittently covered by a salt sea stretching from the Gulf of Mexico to the Arctic. Sediment carried into the sea by flowing water was deposited on the bottom and slowly compacted into strata, or layers, of sedimentary rock made up of clay, shale, sandstone, and limestone. (Robinson, 1966: 2)

If wandering around in the badlands today, the tops of all the buttes represent the bottom of that ancient and dried up sea floor. Erosion from glacial advances and retreats helped shape what we see and make up our landscape on the northern Great Plains, and also what Rothaus and Reinhard slogged through all day. I noticed the slipperiness of this clay and mud about mid-morning (04/22/2013): while sitting in the cab and reading, and while the mid-morning sun warmed the badlands, the snow and mud went from frozen to melt, and this caused the field vehicle to start sliding from a standstill. This feeling is at first a bit unsettling, at least before realizing what is happening. I fired up the vehicle and drove it to a less-remote location, namely a raised and ditched off-road of Highway 85, not too far north of Grassy Butte, North Dakota. That solved the vehicle sliding problem.

From here I collected some traffic samples, capturing the number of vehicles that passed by in two separate 15-minute windows. Below is a short clip of the traffic (arguably a way to humanize the social science).

This entry was posted on Tuesday, April 23rd, 2013 at 10:08 am and tagged with Adventure Science, Andrew Reinhard, Bakken, Great Plains History, North Dakota, Richard Rothaus, World History and posted in Uncategorized. You can follow any responses to this entry through the RSS 2.0 feed.
« Art Deco in North Dakota: Some Quick Thoughts
Real, Surreal, Romantic, and Wilderness »