This last week while revisiting John C. Hudson’s 1976 article, “Migration to an American Frontier” in Annals of the Association of American Geographers, Vol. 66, No. 2, pp. 242-265, I came across this photo of German-Russian vernacular architecture. As the caption says, this is from 1894, taken right around Kulm, LaMoure County, North Dakota — the county just east of Emmons County, where the Welk German-Russian homestead is located (recent articles on that here, here, and here). 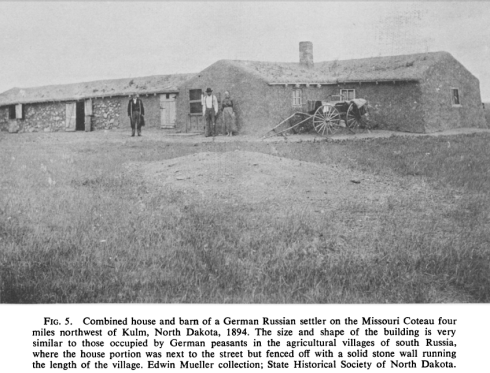 The Welk homestead, in turn, is just down the road from Braddock, Emmons County, North Dakota, where my great grandfather Barth homesteaded and farmed. Barth was an Ohio-German imbedded amongst the German-Russians, something not as difficult to pull off as it might sound. Anyhow, below is also a map of the German-Russian migration to the Dakotas, at least as it played out just before and after the turn of the 19th century. 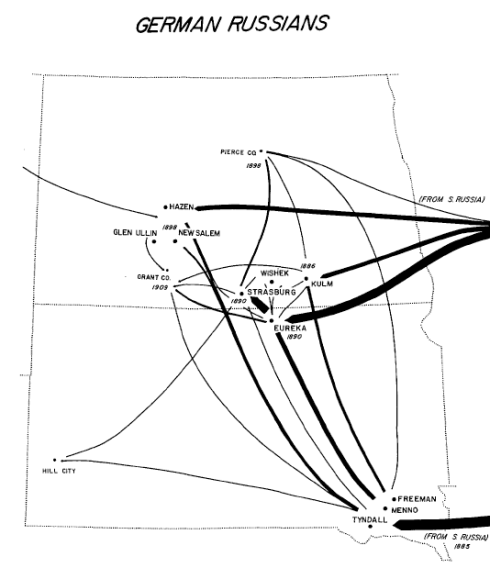 A Panoramic of the James River Coteau

I’ve been fiddling with the “Panoramic” feature on the iPhone 4s. I realize that everyone but me knew about this. But I thought I’d upload at least one photo snapped yesterday approximately 5 miles east and 2 miles south of Kulm, North Dakota. The photo is looking to the northeast and east, just on the ridge of the coteau that drops into the James River Valley proper. To my immediate east, the water goes into the James River. To my immediate west, the water ultimately finds its way to the Missouri River. Both water streams merge around Yankton, South Dakota, and ultimately empty into the Mississippi, then the Gulf of Mexico. Hydrology kind of connects us to the land that way.

To get to your “Panoramic” setting, at least on an iPhone 4s, turn on the camera, tap the “Options” button top-center of the screen, and then tap “Panorama.” Then start experimenting.